In addition, the lack of managing the data uniformly through the big data task obstructs the application of modern techniques such as data monitoring, data-aware optimization, and fault-tolerance, thus, further decreases the productive efficiency.

To address this issue, vineyard provides: 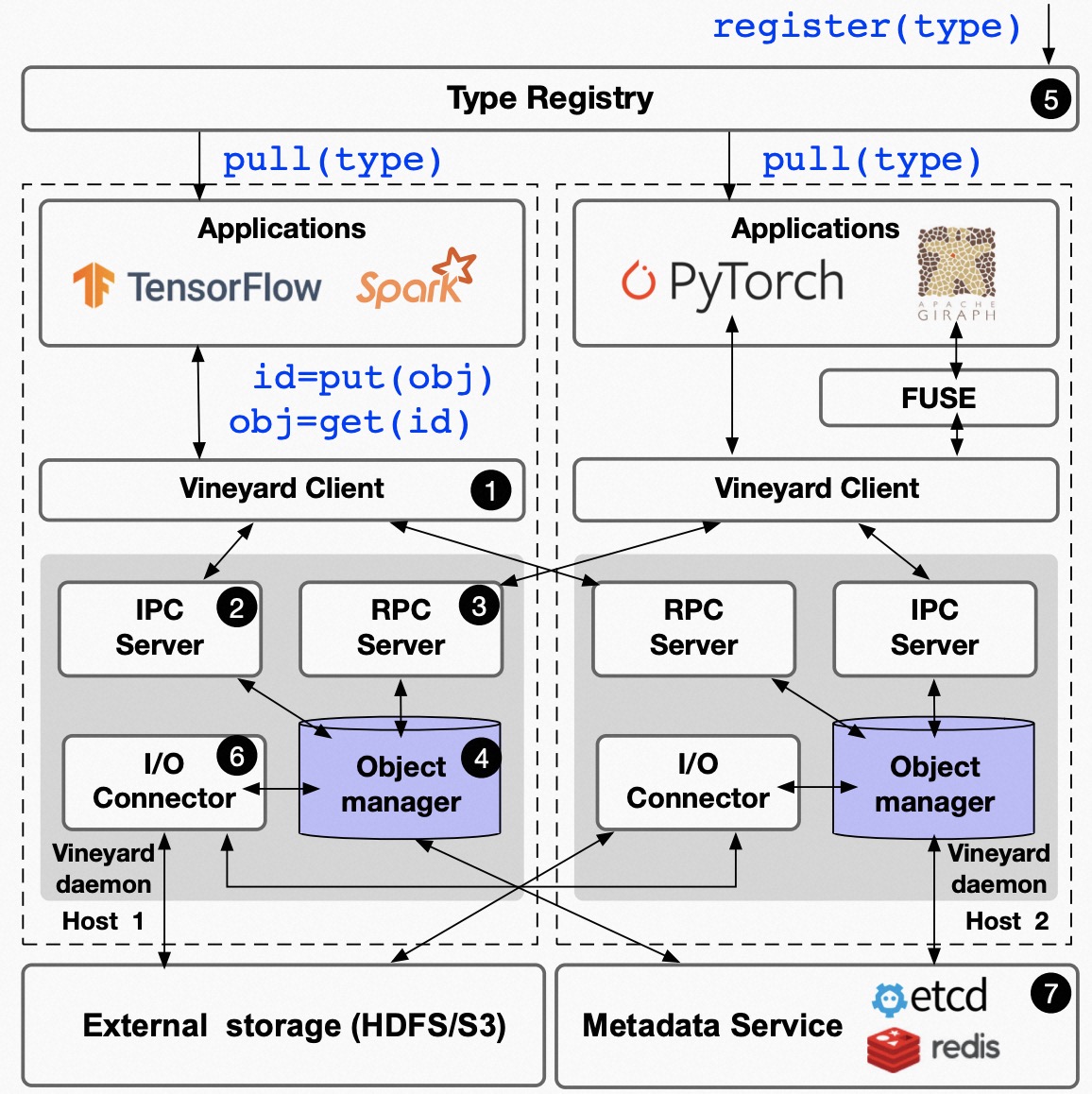 The figure demonstrates the architecture of vineyard.

On the server/daemon side (i.e., the aforementioned vineyard instance), there are four major components:

On the other hand, the client side consists of both the high-level APIs (e.g., edge traversals for distributed graphs) to easily reuse the data in vineyard and the low-level APIs for specific drivers to access the vineyard instance in a more delicate fashion.

In particular, for the meta data and methods of vineyard objects, vineyard employs two design choices:

Vineyard supports store very large objects across many nodes in a cluster and allows user programs to treat those as a whole. Data are shaded to many machines and no replication happens.

Taking DataFrame as an example, in real world cases the table may consists billions of rows and cannot be fit into a single machine. Under such conditions, the dataframe could be split along the index axis or column axis and every vineyard node holds a subset of chunks. Vineyard still provides a logical view about the complete dataframe and allows distributed computation engines like Mars and GraphScope to process such data structures as a whole.

For example, a distributed graph is composed of partitioned graph fragments, while a graph fragment is composed of vertices and edges within that fragment. Recall the decoupling design of payload and layout of vineyard objects, in a graph fragment, the vertices and edges within the fragment is stored locally in the corresponding vineyard instance for the partition, meanwhile, the meta data (e.g., partition index, number of vertices, and number of edges) are stored in the backend key-value store.

In particular, our extensible design on builders, resolvers and drivers, allows users to build, resolve and share their data structures easily through different systems and paradigms respectively, and the registry mechanism is so basic that even the core data structures and drivers in vineyard also follows the same design.

So what is the registry mechanism?

In general, the registry mechanism decouples the methods from the definition of vineyard data types. For builders and resolvers, it means users can flexibility register different implementation in different languages to build and resolve the same vineyard data type, which makes the data available to share between different systems and paradigms, and makes it possible to exploit native language optimizations.

On the other hand, for drivers, the registry mechanism allows users to flexibly plug-in functionality methods in different languages for vineyard data types, which assigns required capability to the data types along with the data analytical process.

Further more, the registered methods can be implemented and optimized in accordance with specific data analytical tasks for further efficiency augmentation.

As we mentioned before, for each object in vineyard, it consists of two parts:

In particualr, Blob is the unit where the data payload lives in a vineyard instance. A blob object holds a segment of memory in the bulk store of the vineyard instance, so that users can save their local buffer into a blob and get the blob later in another process in a zero-copy fashion through memory mapping.

Here we can get the meta data of the pair object from client2 though client1 created it, but we can’t get the payload of the first element of the pair from client2, since it is stored locally in the first vineyard instance.

As we shown above, vineyard allows users to register builders/resolvers to build/resolve vineyard objects from/to the data types in the client side based on the computation requirements.

Suppose pyarrow types are employed in the context, then we can define the builder and resolver between vineyard::NumericArray and pyarrow.NumericArray as follows:

Finally, we register the builder and resolver for automatic building and resolving:

There are cases where we have more than one resolvers or builders for a certain type, e.g., the vineyard::Tensor object can be resolved as numpy.ndarray or xgboost::DMatrix. We could have

at the same time. The stackable resolver_context could help there,

The with resolver_context is nestable as well.

As we shown in the getting-started, the open function in vineyard can open a local file as a stream for consuming, and we notice that the path of the local file is headed with the scheme file://.

Actually, vineyard supports several different types of data source, e.g., kafka:// for kafka topics. The functional methods to open different data sources as vineyard streams are called drivers in vineyard. They are registered to open for specific schemes, so that when open is invoked, it will dispatch the corresponding driver to handle the specific data source according to the scheme of the path.

The following sample code demonstrates the dispatching logic in open, and the registration examples.

Most importantly, the registration design allows users to register their own drivers to registerized vineyard methods using .register, which prevents major revisions on the processing code to fulfill customized computation requirements.

By examining the practice of big data tasks such as numeric computing, machine learning and graph analysis carefully, we summarize that the data involved has four properties:

Thus vineyard is designed accordingly with:

In general, the design choices of vineyard are fully determined on coping the difficulties in handling large-scale distributed data in practice.

Vineyard objects are stored with structures, and high-level abstractions. For instance, a graph with CSR format in vineyard stores the index as long as the vertices and edges, so that operations like edge iteration based on the index can be provided. Thus, users don’t have to implement the index-building function and edge iterators by themselves, which is usually required in the existing big data practice.

Vineyard provides zero-cost data sharing by memory-mapping, since data objects in vineyard are immutable. When the object is created, we allocate blobs in vineyard to store the data payload, on the other hand, when getting the object, we map the blob from the vineyard instance into the application process with inter-process memory mapping approaches, so that no memory copy is involved in sharing the data payload.

The extensive design on builder/resolver/driver allows convenient extension of existing vineyard objects to different programming languages. Moreover, with codegen tools in vineyard, makes it possible for users to transplant their data structures into vineyard with only a few annotations.

Data orchestration in a python notebook

Using vineyard as the common data orchestration engine through the end-to-end big data processing, users can hold large-scale distributed data as variables of vineyard objects in python. Thus, as long as the computation modules involved provides python API, users can write down the entire processing pipeline in a python notebook. By running the python script, users can manage trillions of data and different computation systems in the background distributedly across the cluster.

Once a vineyard object is created and sealed in the vineyard instance, it becomes immutable and can NOT be modified anymore. Thus vineyard is not suitable to be utilized as a data cache to store mutable data that changes rapidly along the processing pipeline.

The partitions of a distributed data are stored distributedly in corresponding vineyard instances of the cluster. Only the client on the same machine can access the data partition. In case to access a remote partition, data migration APIs of vineyard can be invoked to trigger migration process, but not for instant accessing.